Seconds after posting a video on YouTube, I leave a clarifying comment. But it’s too late. In the few seconds I took to write the comment, there are already 100 views and 4 comments. One comment stands out from all others: the person who has written “FIRST!” to claim the virtual territory before anyone else watched the video.

We tend to revere being first above all else. But is this a good thing? Might we be better off under another rule that does not assign ownership and credit to the sole person who ended up first?

I came across an intriguing insight while watching a video about the games animals play. In the 1970s, John Maynard Smith applied game theory to biology and created a new field of evolutionary game theory. He realized that if we could model how animals compete, we might be able to explain how they behave over time through an equilibrium concept he called evolutionarily stable strategies. In other words, a game theory model of competition might explain strange animal behavior.

Could there be a reason that we respect being FIRST? A possible answer lies in a game known as the war of attrition. The game is normally ruinous to those involved, but a society that respects the rule of being FIRST can avoid problems and actually profit. And this is actually seen in animal mating behavior. Let’s understand why being FIRST is so important.

At Princeton University, it is customary for students to applaud a teacher on the last day of lecture. In his game theory course, Economics Professor Avinash Dixit added a twist: he would give money, between $20 to $50, to the student that continued to applaud for the longest time.

You can imagine how the game played out in many years. Some students suspected the competition would be futile and dropped out immediately. Others applauded for a while and then dropped out within 15 to 20 minutes. Typically more and more students cut their losses and stopped. The competition was not for the impatient: it once took 4.5 hours to crown a winner!

This applause competition is an example of a game known as the war of attrition. The game is characterized by players who engage in a costly competition for a single prize. Each player incurs costs over time and can elect to drop out at any time. The sole player that stays for the longest time and outlasts all others is awarded the prize.

The game is a suitable model for many winner-take-all competitions, including lawsuits, wars, political elections, sporting championships, and even dating.

You can think about this game as a kind of auction. Each player “bids” an amount of time he or she is willing to remain in the game. The player with the highest bid earns the prize. But everyone in the auction has to pay the price of his or her bid. You want to outbid others, but you also are worried about incurring costs and then losing. There is a tension between fighting in order to win and giving up to avoid losses.

How would rational agents play this game?

There are many versions of the war of attrition, depending on how many players there are, how each values the prize, and whether each knows the values of the others.

The classic example has 2 players who each value a prize worth V and incur a cost of 1 unit per time. What should each player do?

How can we solve this game? This is the key insight: in the equilibrium, you should be indifferent between dropping out and staying. If you stay any longer, you are incurring more expected costs than you recover by the expected payoff from the prize. If you did not stay as long, you would have been better off fighting as your expected costs would be less than your expected payoff from the prize.

Now let us formalize the logic. Suppose each player stays for time t with a probability distribution p(t). Write the probability of staying until time t as the cumulative distribution P(t).

So we have the equation:

The last equation uses λ(t) to denote the “hazard rate” or the failure rate. This game’s strategy involves a constant hazard rate, which means that at any given moment there is a constant rate 1/V at which a player drops out.

Notably, the hazard rate has the “memoryless” property–the amount of time you are willing to wait depends only on the value of the prize, and not on the amount of time you have already waited. This idea might sound strange, but we frequently encounter probability situations that have the memoryless property. For example, think about the flips needed until a coin shows heads. The expected wait time is 2 flips. This is true regardless of what the coin has shown before–it could have shown tails, it could have shown 5 heads, or it could have shown any other sequence. Regardless of what the coin has shown already, you can still expect it will take 2 flips to show a heads. The same is true for the amount of time for a dice to show a 6, and all discrete cases are examples of the geometric distribution.

Similarly, statistics textbooks often model waiting for a bus as a continuous distribution that has the memoryless property. If you know a bus line has an average wait time of 10 minutes, then you can expect to wait 10 minutes for the next bus. This is true even if you just missed the bus, or if you arrive and there are already people who have been waiting for many minutes.

Why does this strategy make sense intuitively? Think about the probability you should assign to waiting for 1 more minute in the game. If you’re at the start of the game, you will assign some value x. What happens if you’re at 10 minutes in the game? From your perspective, the game is essentially still the same. While you have waited 10 minutes, the cost you incurred is a sunk cost, and the prize is still fixed at V. From a marginal cost/benefit perspective, your marginal cost is still 1 unit per time, and your marginal benefit is still V times the probability you win. Therefore, even at 10 minutes you should have a probability x of waiting 1 more minute.

In fact, at any time you should have the same value x of wanting to wait 1 more minute. The probability distribution must have no memory of how long you have waited, and that is what leads to the solution of the exponential distribution.

Surprisingly there is evidence of this kind of strategy when male dung flies compete against each other when mating for females. Each fly incurs a cost while waiting for the prize of mating. The waiting times of flies fit roughly to an exponential distribution.

Would you ever voluntarily want to play a war of attrition? There is wastefulness to the game because participants have to incur costs for the hope of winning the prize.

In the two player game, we can calculate the expected value of the exponential distribution to find each player has an expected payoff of 0. But this is strange! Why would you spend $10 in order to win $10 on average? It makes no sense. The surplus is lost in the competition, and you might as well avoid the game.

John Maynard Smith considered how to avoid a ruinous outcome. We humans might decide to flip a coin so each person expects to win V/2 and there is no loss in the cost of waiting. But animals don’t flip coins. So what might they do?

He suspected they could use some convention to avoid conflict. If there was an asymmetry in the game, or a way to assign ownership, then it would be agreed one person gets the prize and the other stays away.

In the lecture, John Maynard Smith cites the work of Hans Kummer on the hamadryas baboon. Male baboons are about 3 times larger than females and they often have relationships with a few female baboons at a time. You might expect male baboons would fight over females, engaging in a kind of a war of attrition.

Kummer demonstrated a means by which they avoid conflict in a field experiment. In one setup, male A is in an enclosure and watches male B form a bond with a female. 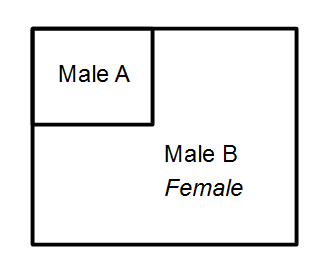 After a period of time, Male A is then let out of the restricted area, and it turns out male A respects the bond and does not fight with male B.

Is this because male B is larger than male A? Kummer repeated the experiment in another week, but now with a new female and the roles reversed. Male B is in an enclosure and watches male A form a bond with a female. 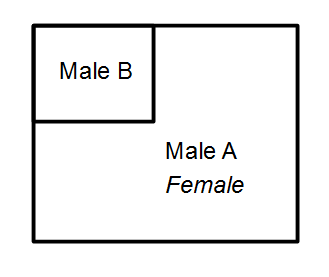 When male B is released, he also does not fight male A.

The experiment demonstrates that males baboons respect the “ownership”/relationship of the first person to form a bond with a female. This mating strategy allows the male baboons to avoid ruinous wars of attrition and all baboons benefit from the arrangement.

In other species there might be other conventions for assigning ownership, like an asymmetry of size or position.

We can draw an analogy to human behavior with the saying, “a friend who dates your ex is now your ex-friend.” People who follow this convention can avoid messy emotional and physical fights with others in the same social group. The saying is a way to give an asymmetrical advantage to the first person who forms the relationship.

But this rule is not strictly followed. And people get in messy situations. It is a reminder that humans do not always avoid wars of attrition, in relationships or otherwise.

In legal matters, for example, parties can avoid the war of attrition by agreeing to terms early and settling. But if they cannot agree, they engage in a game where both sides incur legal costs hoping the other will drop out and settle favorably. The same goes for political elections: candidates that spend millions of dollars campaigning may have been better served by avoiding the election altogether. Courts often encourage sides to settle and avoid trials and organized political parties try to limit the field of candidates early to avoid vicious and hard-fought campaigns.

If we never agreed to convention or never granted someone else ownership, then everything would be like a lawsuit or a political campaign. Legal ownership lets us avoid costly wars of attrition and can lead to a surplus for society.

Where legal ownership does not exist, we have social conventions that grant respect to people who arrived first. This is most commonly seen in the lines we form at movie theaters, grocery stores, public transit stops, restaurants, and many more places.

The notion that we respect the FIRST of something is so ingrained it is not a stretch to see why we might apply it to other areas like YouTube comments, even if writing FIRST is ultimately a joke about how society places high value to being FIRST.

You can support me and this site at Patreon.

More:
The Game Theory Of Being FIRST! Lessons From The War Of Attrition – Game Theory Tuesdays

Candy Crush Saga: Level 84 (No Boosters) iPad
Shows the completion of level 84 in the iOS game Candy Crush. No Boosters ever used in the game. 1 Star. Played on iPad (Retina display).